We asked the Black Marlin’s Executive Chef, Gail Huesmann, to interview one of her favorite local chefs on the island and to let us listen in as they discussed favorite dishes, cooking techniques, and culinary influences.

Warning: the discussion below is sure to make you hungry. Don’t say we didn’t warn you!

From a young age Chef Tiana Worsham, co-owner and Chef of The Phoenix restaurant in Port Aransas, noticed that food was a universal language that made people happy. In her grandmother’s kitchen, where Caribbean cuisine prevailed, meals were a transformative experience that brought everyone together. Growing up in south Texas, Tiana was influenced by her Trinidadian grandmother on her mother’s side and her Mexican American and European heritage on her father’s side. These influences produced a talented chef with a love for spicy, flavorful food, fresh ground chilis, and curries plus an appreciation for Texas Gulf Brown Shrimp and barbecued beef brisket.

Tiana came down to Port Aransas when she was still a line cook, fell in love with the Gulf, and decided to stay and make Port A her home. And we are glad she did. The connection to the water is what speaks most to her and allows her to use abundant freshly caught seafood, and to incorporate the flavors of the coastal bend in imaginative ways.

As Chef Gail says, “cooking is like a time machine,” and Tiana agrees that the ability to invoke cherished memories and to revive a connection to previous experiences through food is the most rewarding aspect of chefdom. Asked to choose one dish she prepares that speaks to her heart and soul, Tiana mentions her Moho de Ajo; Brown Gulf Shrimp in garlic, olive oil, chipotle, cilantro, and lime served with jasmine rice and sautéed cabbage. It’s a classic Mexican preparation but reinterpreted with regional flair.

Tiana says that with experience she has gained a respect and appreciation for quality foods and an understanding that the food’s natural flavor must shine through.

Her evolution as a chef means not overwhelming the taste buds but just enhancing the inherent flavor of the dish. In her earlier years she was fond of too many ingredients, but now prefers cleaner, crisp foods simply prepared that leave diners with a lingering memory of a delicious experience.

Tiana installed a chef’s grade kitchen at home, including a center butcher block island and ovens with both convection and rotisserie features. She keeps her pots and woks handy on racks nearby and has no doors on her cabinets to allow her the same efficiency and ease as she has at the restaurant. Both Gail and Tiana are fond of flat tops; the huge cast iron griddles that allow them to cook everything from pizza to pancakes.

As for her personal eating preferences, Tiana loves Texas barbecue brisket , prefers St. Louis style ribs over baby backs, and considers pozole and homemade meatloaf with gravy comfort foods. Tiana favors mashed potatoes over fries (though poutine might be an exception!), loves a good blue cheese, be it Maytag or gorgonzola, considers pico de gallo a staple condiment, and likes her tortillas made from a mixture of flour and corn. After a meal she’d rather have fruit than a desert, and likes white fish over salmon, unless it’s sushi, and then Pacific salmon is the best.

Both Chef Gail and Chef Tiana celebrate their Gulf location in their food and cooking styles, creating elegant clean flavors from the abundant wildlife of the Texas coastal region. Now if that didn’t whet your appetite, there is something wrong! So, head on over to The Back Marlin or The Phoenix and taste some of the best food around from two of the best chefs on the Gulf Coast. 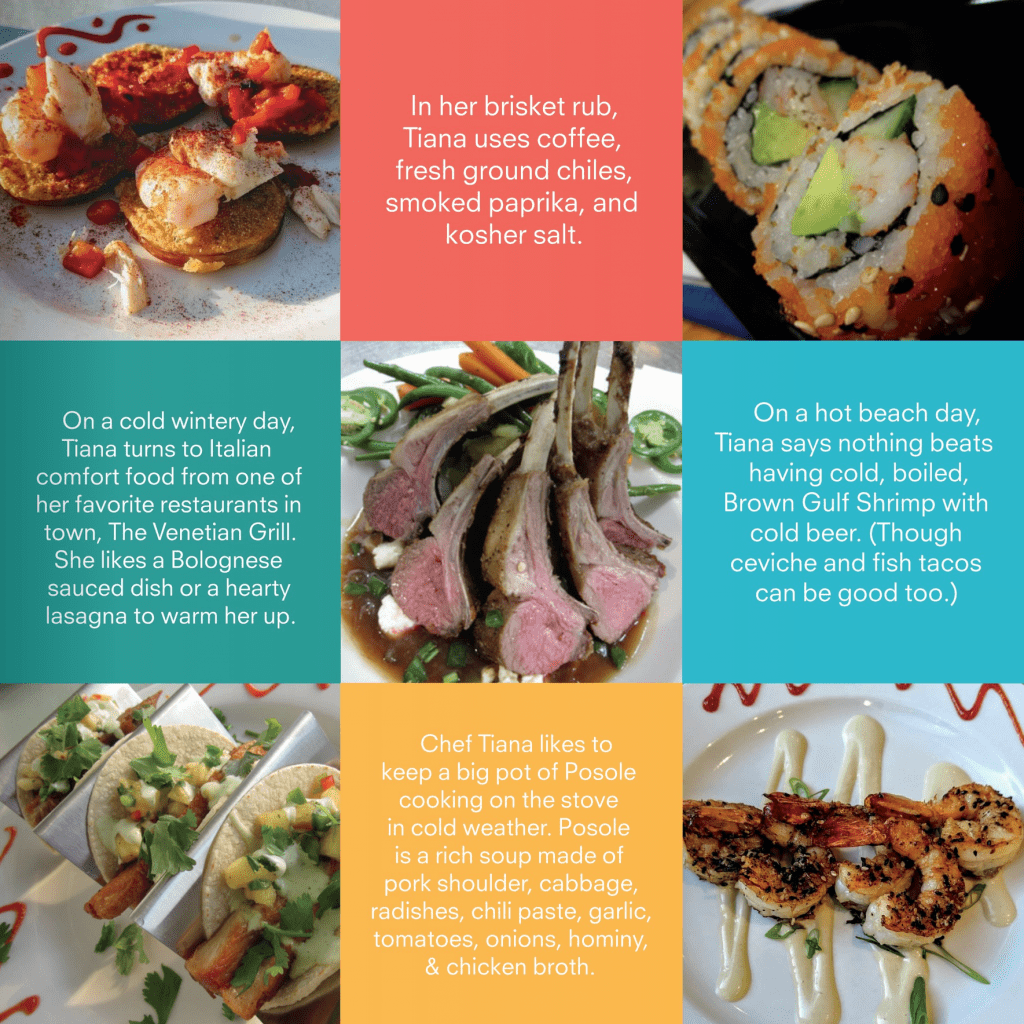 Save The Turtles (And Make A Great Family Memory)

Beach homes are special places where family magic happens, legends are born, and traditions are…

Making it better for generations of Texan families to enjoy for years to come. This…